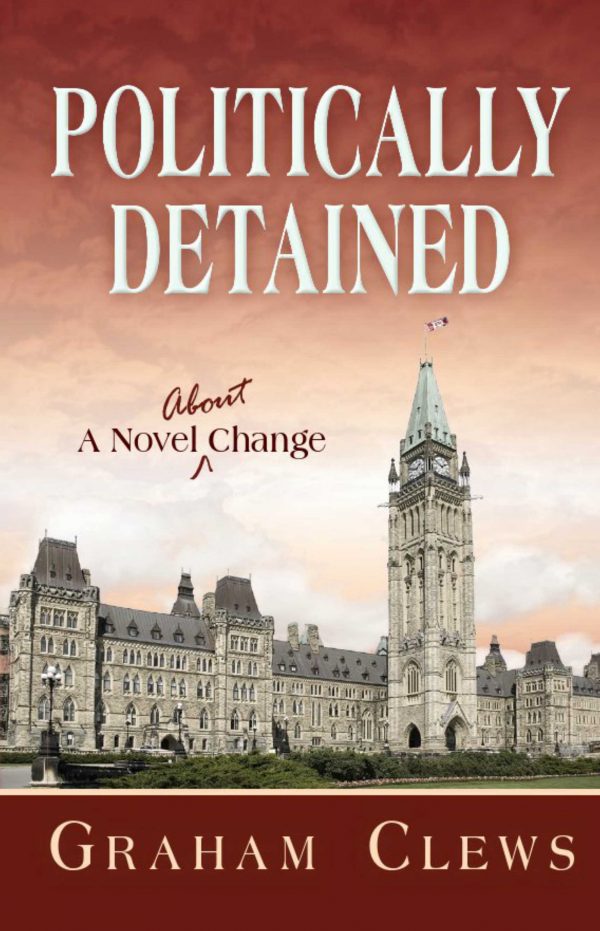 There’s a lot of interest in Canadian politics at the moment, and the timing of this book could not be better. The state of our federal affairs has piqued Graham Clews’ sense of right and wrong. Politically Detained was created with an unusual cast of characters who bring an adventurous interest to an often boring topic.

Fed up with bad federal policy, needless giveaways, and the perks, right-speak and often outright duplicity of our politicians? So are a few others, and they’re prepared to do something about it. In a uniquely ‘novel’ approach, the author brings action, humour and thoughtful introspection to an otherwise dry and often dull topic. With an ageing cast of characters determined to actually do something about the problems, he targets several pieces of defective legislation, and the self-serving flaws built into the election process by the politicians who created it.

The minister of finance, Jim McGregor, is tired and frustrated after eight years implementing financial policy issued from an increasingly dictatorial prime minister’s office (the PMO), and decides to resign before the next election. His dissatisfaction is deep, however, and he intends to go out with a huge bang, not a whimper.

In the small town of Westlock, Alberta, a small group of Saturday morning coffee/breakfast regulars at Mew’s Road House Cafe are equally dissatisfied. Half a dozen well heeled, geriatric males, all retired or semi retired, they too are fed up with the workings of government. Having griped and complained about Ottawa over the coffee table for years (as happens every day, and everywhere, all across Canada), they decide to take notes; serious notes that include solutions. And there is a connection with Jim McGregor…

One member of the group, Willis Walters, attended the U of A with the finance minister, and while sharing accommodation for three years they became good friends. They meet again at an alumni reunion at a time when the finance minister is particularly depressed. Problems and notes are shared, and over the ensuing months Willis plays on McGregor’s desire to ‘go out with a bang’. An action plan is gradually formed that will grab the public’s attention and focus on what both parties see as needed change.

The minister of finance is scooped off the street on a visit to Edmonton, and taken to a fishing lodge in northern Alberta. Under the belief that this unexplained absence will provide maximum publicity, formal legislative changes are tabled by the minister’s office after he has gone missing. Each is publicized individually in national newspapers over a three day period, while the PM is also away in New Zealand. But to make public attention even more assured, one member of the coffee group, along with his wife, serves citizens’ arrests on two politicians. They are a man and a woman who are generally believed to have committed crimes for which they were never charged: a former prime minister for tax evasion and possible receipt of bribes; the second a female senator for fraudulent expense claims.

Matters start to go wrong when a female MP for Edmonton Centre is accidentally scooped up in their net, an act that is initially viewed by the Edmonton police as a kidnapping. The RCMP and other federal organizations become involved, and they set out to track down the two politicians and their abductors. Along the way, they begin to find a grudging respect for the finance minister as one by one his legislative amendments hit the newspapers. Nonetheless, they are duty bound…